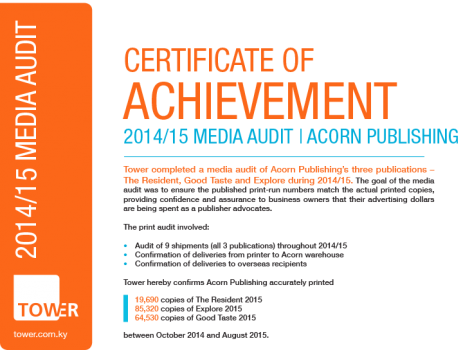 March 18, 2014 - Acorn Publishing recently engaged Tower to provide a media audit of its three publications, Good Taste, The Resident and Explore. The media audit will ensure the published print-run numbers match the actual printed copies providing confidence and assurance to business owners that their advertising dollars are being spent as a publisher advocates.

“An audit such as this eliminates any perceived gap between what a publisher says and what it does.  It’s a win-win for both publisher and advertiser – the publisher is able to maximize the value of its publications and the advertiser is able to confidently deliver more targeted and relevant campaigns,” she said.

Ms Byles said the audit was a comprehensive and thorough process.

“Including verifying receipt of shipments from the printers upon landing in Cayman prior to distribution and cross referencing delivered quantities against information provided by the printer against customs paperwork. Additional services will include distribution and online audits.”

Ms Byles said Tower began offering the service as there was a real need in the market.

“There are no independent readership or circulation statistics available on island, so Tower was able to utilise its extensive market research experience and expertise to provide this new service and to introduce a greater level of transparency in the Cayman media market,” she said. “We have been conducting market research projects for local and international organisations for over 10 years, including Dart, the Cayman Islands Government, HSBC, British American Tobacco, The Department of Tourism, CUC, Digicel, CIBC-FCIB, British Caymanian, and the Chamber Pension Plan.”

Mr Charles Grover, Publishing Director at Acorn said he was delighted with the service.

“It’s great to help pioneer transparency in the Cayman media world. Cayman is playing catch-up to other developed economies that have been providing independently audit media services for years. There has been a lot of mis-information in Cayman about print-run numbers and readership numbers and now for the first time this media audit provides accountability and a benchmark that businesses can tap into to ensure their marketing dollars are being wisely spent,” he said.

“We would urge every business owner to demand that their media providers open their doors and also audit their products. This increase in transparency will provide a level playing field, increase the levels of trust and ultimately ensure that businesses are getting better value for money from their advertising activities.”

Tower is a member of ESOMAR, the world’s leading market research association with over 4,900 members in 130 countries, which actively seeks to encourage the highest technical standards in market research, while establishing codes of ethical standards among its members. It’s also a member of the Cayman Islands Marketing Professionals Association (CIMPA), as well as the Chamber of Commerce and Cayman Islands Tourism Association.

“The goal of the media audit is to encourage transparency, which is an essential component in marketing,” she said. “We therefore believe Tower’s media auditing service is a great tool for marketers and will greatly enhance marketing services in the Cayman Islands as a whole.”